It has been really rather a long time since I last shared one of my creations but keeping this one under wraps was a priority, otherwise it wouldn’t have been much of a surprise for its recipient! To celebrate 5 … END_OF_DOCUMENT_TOKEN_TO_BE_REPLACED

When imaging and creating a mosaic there are a large variety of motifs and designs one can choose from to create an authentically classical style, but  for anyone out there who has seen many of my mosaic’s there is a … END_OF_DOCUMENT_TOKEN_TO_BE_REPLACED

My mosaics are now available to buy online for a limited time only!  Over the last two years I’ve created a number a mosaic designs however I am beginning to run out of space, therefore I’m selling some of my … END_OF_DOCUMENT_TOKEN_TO_BE_REPLACED

Grouted and polished, the table is finally complete and is now a working piece of furniture and I must admit, that I am pretty pleased with the final outcome. As I have found many times before the grouting has made … END_OF_DOCUMENT_TOKEN_TO_BE_REPLACED

After some more hard work the mosaic is more or less complete now, the last tesserae have been laid, and now it only needs grouting to consolidate it and finish it proper. As the opposite half exhibited a personification of … END_OF_DOCUMENT_TOKEN_TO_BE_REPLACED

Work has continued on my ‘masterpiece’ and  it has hit and surpassed the halfway mark now, the end is sort of in sight. One side and the middle section done, just the other side left to do in which I … END_OF_DOCUMENT_TOKEN_TO_BE_REPLACED

Work has begun on my biggest project to date, a mosaic table. It has long been an aspiration to create a larger more complex design however I have been devoid of a medium for such a creation, until recently when … END_OF_DOCUMENT_TOKEN_TO_BE_REPLACED

Another month has gone by and so I have another mosaic,  but not for me this time but a gift for someone else.  A couple of months ago it was suggested to me that I should make a mosaic tray … END_OF_DOCUMENT_TOKEN_TO_BE_REPLACED

Unearthed in 2007, the Beau Street Hoard is a hoard of over 17,500 Roman coins found during excavations prior to a building development and is a hoard that I’ve had the pleasure of cataloguing for Bath at the British Museum over the last 6 months.

On the 22nd – 24th of April 2015 however, this effort came to a head with the Beau Street Hoard symposium.   Three days of lecture and debate presenting recent research on the hoard, Roman Bath and hoarding in 3rd century Britain, courageously organised by the good people at the Roman Baths,  and I had the pleasure of speaking on the composition of the Beau Street hoard. 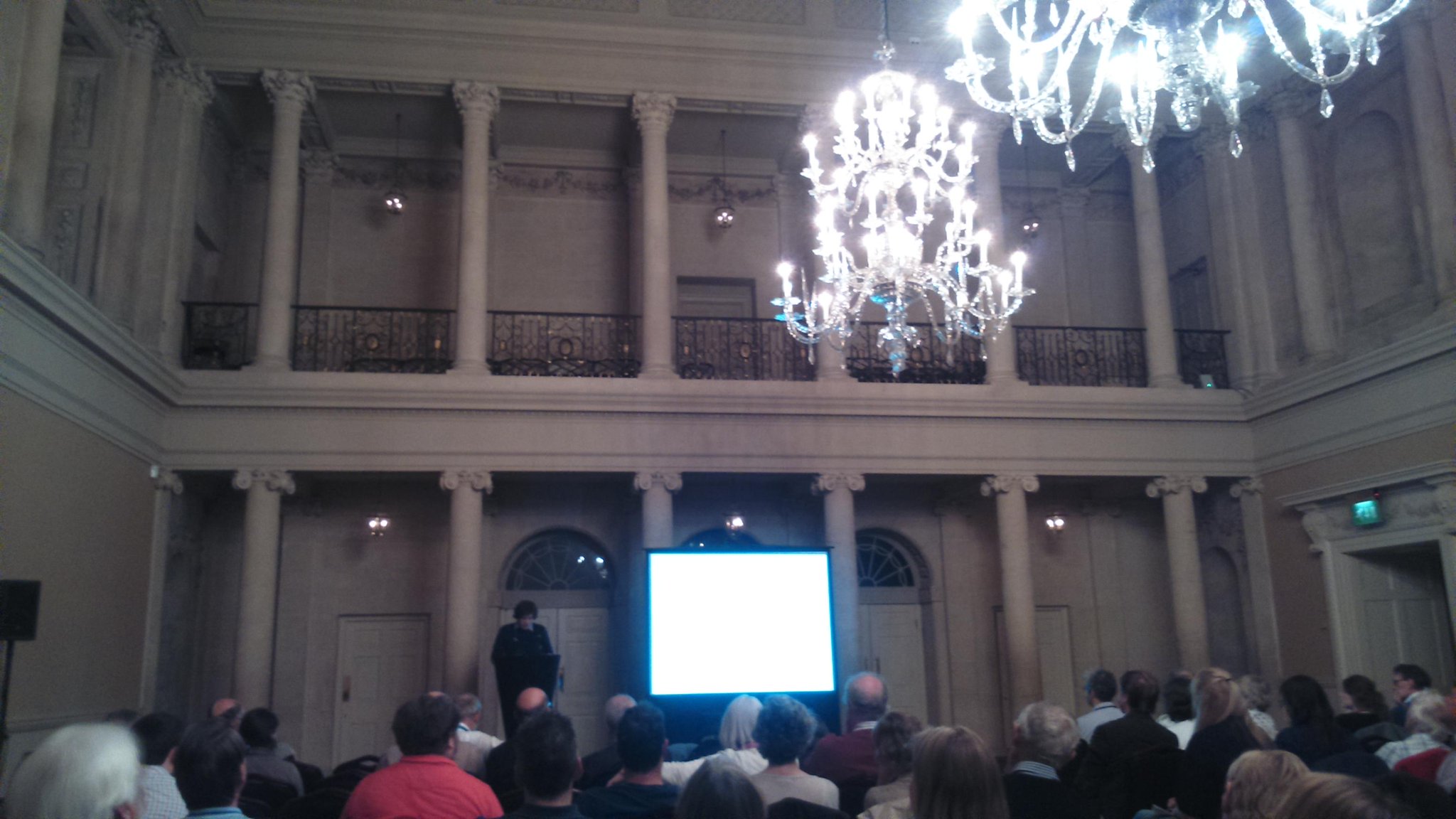 Myself at the Beau Street Hoard Symposium, a great event at lovely setting – from https://twitter.com/beausthoard

The composition of the hoard is interesting because when it was excavated, it was found to be separated into a number of bags providing us with a number of mini hoards within a hoard.  After examination it emerged that it was separated into 8 bags as well as having a number of disturbed coins, either migrations from the bags, or evidence of a final but long since burst 9th bag.   Indeed these bags held further points of interest in the way that the coins from each bag appeared to have been artificially sorted in order to create bags of certain denominations. Therefore there was one bag filled by denarii, 4 bags filled by silvered radiates and three bags of debased radiates,  as well as the un-bagged material which was dominated by silvered radiates. I will not fully explore the composition of each individual bag here as its a laborious task, however its interesting to note how despite each bag being dominated by a singular denomination, there were a small number of the other denominations in every bag, presumably accidental inclusions missed during sorting.  Furthermore the structure of the silvered radiates bags noticeably varied, tentatively hinting that they might have been collected over a number of different years, although such a notion is still speculative.

So why was it separated and collected as such?  Ultimately it would appear to me as some sort of savings hoard. This could explain why the coins were sorted in such a way as the coins of higher silver quality been separated from those of lesser quality, thus preserving better their wealth. Furthermore the number of denari in this hoard would not have been present in circulation when the final coins of the debased radiate bags were deposited, indeed many of the silvered radiates did not appear to be greatly worn and plausibly could have been removed and added to the hoard over a period of time, therefore it suggests it may have taken a number of years to compile this hoard rather than being a singular episode in history,  likely sometime between AD 250 – 273.

It is difficult to establish when in this period that the individual bags were constructed because of the very fact that they were artificially created and sorted and thus do not reflect truthfully the circulation of the period as earlier and later coins were relocated to other bags within the hoard. How many times they may have been sorted is uncertain so may have occurred a number of times, especially ass the hoard looks like it would have been compiled over a few decades. Ultimately though, it would appear that the final sorting occurred around AD 273

The  Beau street hoard is a very curious hoard indeed and more analysis of it shall undoubtedly follow, however the of cataloguing the hoard has finally been completed and is in the process of being written up for publication, hopefully later this year.

More information on the hoard is available on The British Museum website &  The Roman Baths website and the coins themselves are on permanent display in the Roman Baths for all to see.

After a long time away from the tessera and tools I’ve managed to get back in touch with my materials and produce a new set of coasters. Produced in my usual way (10 x 10 cm and felt backed) these … END_OF_DOCUMENT_TOKEN_TO_BE_REPLACED